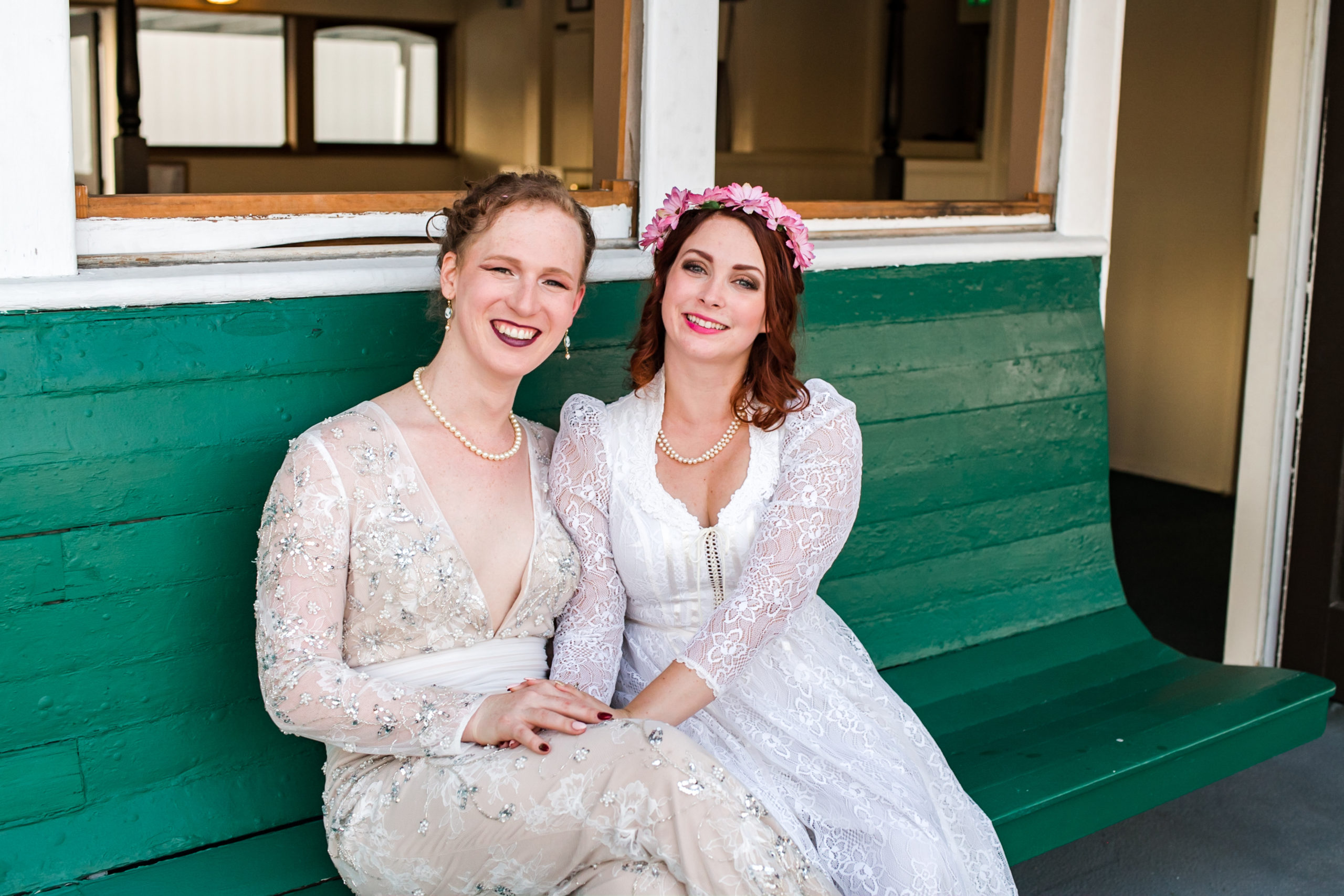 First of all, we want to say a big thank you to Gena of connecting rainbows for giving us the opportunity to write a piece. We’re Kayla and Shelby, and we’re a married lesbian couple. Kayla is a proud trans woman, while Shelby is cisgender. When asked to share a little bit of our story, we chose to focus on how we navigate being a trans and cis couple. We get misconceptions all the time, which we’d love to debunk, but our partnership and who we are is such a beautiful gift that we want to share with the world.

Picture this: A lawn full of rowdy college students at orientation in 2010. Shelby had just come from sorority rush, and was looking real cute! Kayla saw her from across the lawn, and attempted to get herself a hot date, but Shelby was dating this weird guy from Pennsylvania, so Kay went for Shelby’s roomie instead. They dated for literally all of college, but Kay and Shelby developed a wonderful friendship during that time. They continued to just miss each other romantically until 2018, when Shelby, mid-divorce, told Kayla how she felt. Kay started transitioning in 2015, and Shelby’s attraction made a lot more sense! That feeling when your best friend is actually a girl, and then she grows boobs! *chef’s kiss*

Their courtship was relatively speedy, as they already had such a solid base, and on New Year’s Eve, during the first minute of 2019, both women got down on one knee at the same time to propose! The double proposal was not the most surprising part, as the soulmate connection is real. What surprised us was that both of our loud families could keep a secret for that long! We think it’s because they always wanted us to be together! The engagement only lasted 8 months, yet we still pulled off the most beautiful summer boat wedding in Seattle! We have now been married for a year and a half, as of this month!

I think at the core of it, our partnership is sacred and beautiful because it’s the merging of two souls who have decided to live unapologetically as their truest selves. For Shelby, that meant leaving the marriage she was “supposed to” have, taking the leap with her best friend, and coming out professionally. Shelby was an Oklahoma teacher, and you just didn’t come out in that situation. She married a man in college, acknowledged that her relationships with girls were fun college things, and truly convinced herself she could experience passion for a man. However, she finally had enough one day, and she left the marriage, told Kay how she felt, and emerged into her best life!

As for Kayla, the journey has been rocky. As any transgender person will tell you, life as a trans individual is certainly not easy. From literal policy levied against you, to the dangers of walking down the street, there are times that being cisgender would have been nice. However, Kayla learned that to fully love someone else, she had to first find her womanhood, hold on to it, and never let anyone take that from her. Ultimately, she moved to a place she was more comfortable, and then almost serendipitously, was finally ready for Shelby to say those three words we all want to hear. I love you.

As we live our truth together, another beautiful aspect of our relationship is our ability to show one another different sides of everything. Just like any couple, we have different perspectives, but that magnifies when dealing with different experiences of gender. Shelby has learned just how privileged she is to be born in the right body, which is something she thought about too rarely before seeing the other side. Shelby has shown Kayla so many different definitions of womanhood, as she is a woman in everything she does, which means the same goes for Kayla. It doesn’t matter if Kay is wearing a beanie and sweats or a ball gown, because she is a woman in all of it.

The struggle is real. When navigating our relationship in this world, it seems as though every person has an opinion on how our relationship should be. From suggesting that we are not in a wlw (women loving women) couple to literally threats of violence, so many seem to think that our existence is their business. The good news is that the call is not coming from inside the house. Rather, the majority of all issues stems from lack of boundaries, consent, and understanding by those outside our relationship. Sure, there are times when we disagree, or Kayla’s dysphoria is too much. However, they pale in comparison to outside intrusion.

Luckily for us, educating the masses can alleviate so much of this struggle. We believe that public education should be responsible for adding LGBTQ education to a comprehensive sex education or social studies program. The majority of issues couples like ours face could be mitigated or even eradicated through understanding. Further, we are hardly the only cisgender/transgender couple in the world. By living unapologetically and by supporting others in our community to do the same, we further the truths that love is love, that many different kinds of relationships exist, and that how they function is ultimately up to no one but them.

There are some questions we consistently get as a trans and cis couple that are, quite frankly, ignorant and rude. We know that many times, the people who ask are not trying to be offensive. Some of you reading this may have even asked them before because you just didn’t know, so we compiled a list. Of course, different questions may offend different couples, so always err on the side of caution.

These questions, some of which could be asked by very close friends and family, are far too invasive, reductionist, and assuming. It’s none of anyone’s business but ours. It’s crazy how people would never think to ask questions about a cis and straight couple’s genitals, but once an LGBTQ+ individual is involved in a relationship, it’s suddenly fair game to some. Let us repeat this: IT’S NOT FAIR GAME. Just show respect and educate yourself!

Thank you for coming on this journey with us! We encourage you to keep learning about couples different from yourselves, and to celebrate love all around you!

If you would like to see more from us, Shelby is @sparkleandslayblog on Instagram, and Kayla is @kaydeezy0716